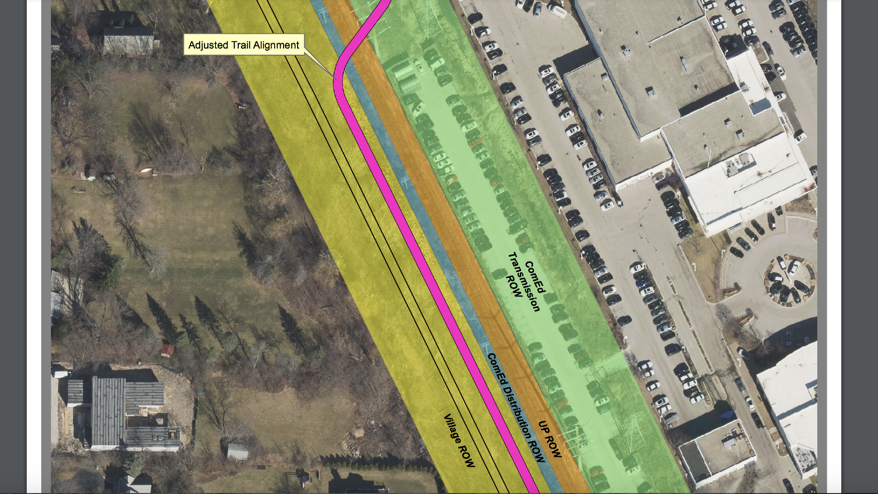 The next step in the Village of Northfield’s ongoing quest to complete its portion of the Skokie Valley Trail is now in motion.

Unanimously Northfield’s Committee of the Whole during its most recent meeting voted to move into Phase II engineering under a proposed plan that bypasses the use of local residents’ beloved “nature trail” path.

The committee’s Oct. 20 meeting was the first time village officials discussed the new option for completing Northfield’s portion of the trail, and trustees ultimately signaled support for the new proposed route.

The Skokie Valley Trail is a regional biking and walking path that, when and if completed, will stretch from the Village of Lake Bluff to the City of Chicago. Northfield’s stretch of the trail is one of the few links that is not completed.

Northfield officials have discussed possibilities for completing their portion of the trail for more than a year.

Plans for multiple proposed options derailed for several reasons, including potential disruptions to a resident-favorite walking trail, which residents have repeatedly referred to as the “nature trail.”

Trustees had already considered half-a-dozen trail possibilities before last week’s meeting, all of which resulted in logistical conflicts or additional concerns from residents.

At the board’s August meeting, Trustee Todd Fowler proposed an option that would include a dual path along the eastern edge of the Northfield-owned right-of-way for the 800 linear feet of the ComEd right-of-way that is occupied by the Field’s parking lot.

This option would leave the “nature trail” undisturbed by creating a parallel route for 800 feet, and then shifting back to the ComEd right-of-way to Tower Road.

Trustees then used the majority of their Oct. 20 meeting to further flesh out this proposal, and both residents and officials displayed more support for this option as opposed to previous alternatives.

Most of the comments made during the public comment portion of the meeting focused on the northern end of the project, specifically when the route gets near Tower Road. This element has been a consistent inclusion in all potential route options the village has discussed. The comments came from a mixture of both Northfield and Northbrook residents.

All of the proposed plans, including the dual-path option that officials selected, include the portion near Tower Road to be linked, which would necessitate Northfield and Northbrook working together.

Village Manager Stacy Sigman told The Record that Northbrook has signaled its willingness to work with Northfield to figure out how to make that connection.

The next step in the process is Phase II engineering, which Sigman estimates will take approximately two years. Because this project involves federal funding, the village is mandated to do what’s called a Phase I, II and III process, Sigman previously told The Record.

Phase II is the detailed engineering and assessment of the proposed trail route village officials have not decided to move forward with. Funding for this phase of the project has already been secured, per Sigman.

“It’s basically getting the drawings ready to put out to bid for construction. So it won’t go out to bid and it won’t go to construction until if and when there’s some funding to actually pay for it. But it’s all of the detailed engineering necessary to design the plan, find the implications, get state approval, all (those sorts of details). And that process takes a good two years typically to get through. So there’s … no formal action or approval required, because it’s really just to prepare the engineering drawings.”

Sigman said the next formal level of approval for this project would happen at some point if and when the project is ready to be built and there’s any sort of financial commitment from the village. She added that Northfield’s Village Board has made it clear the village does not intend to use its funds or reserves to pay any matching funds for constructions.

For this project to move forward and get built, it will have to be funded with private donations, Sigman said.

“The project will never go ahead with anything unless we get grants for it,” she said. “But even if we get grants, those matching dollars, the village does not intend to use our reserves to pay for that because of the financial constraints that we’re under as a community. We really don’t think we have the wherewithal to do that.

“And the community has come together in other times, there’s some park district projects the community has gathered and provided donations to provide the matching funds to grants and that’s the intention here. If and when we’re ready to go to phase III, those funds would have to be raised privately.”