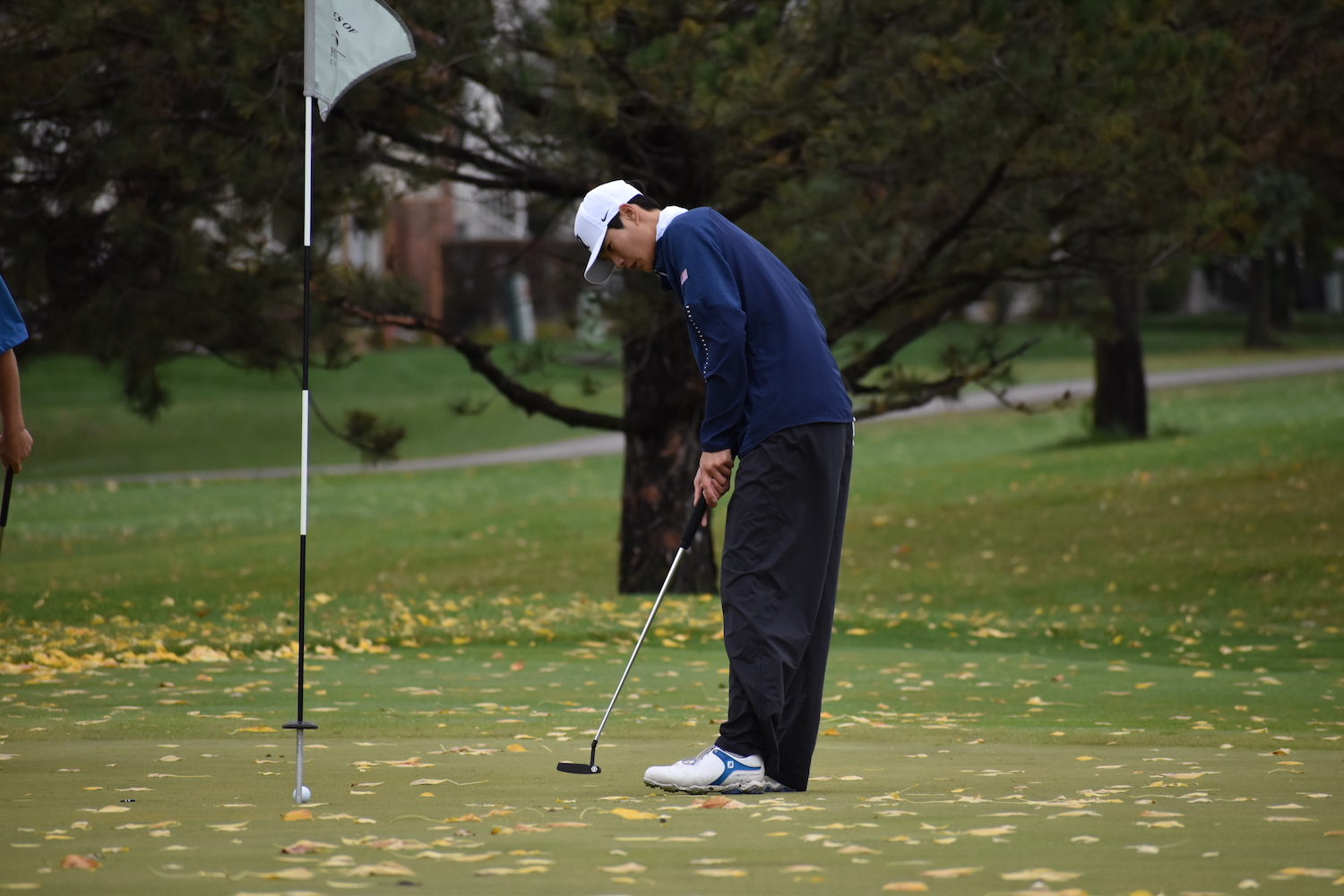 The putt — from the corner of the 18th green, with a downhill winding road to the hole — didn’t have to go in, but it did have to get close enough for a makable leave.

Glenbrook North’s Kevin O’Reagen made sure that was not a problem, sending a smooth roll to within a couple feet of the cup.

With New Trier’s Noah Zyung parring the hole right before his finish, O’Reagan calmly tapped in his par to help the Spartans hold of the Trevians 308-309 in the IHSA Class 3A Conant Sectional Monday, Oct. 12, at the Bridges of Poplar Creek in Hoffman Estates.

(Check out a photo gallery from the sectional tournament)

While the final hole had meaning, Trevs coach Pete Drevline aptly pointed out the tournament was not won or lost on that green, adding that any of his players could have shaved a stroke at any point in the round.

A bigger impact on the scoring was the wetaher.

With temperatures in the low 50s, a constant rain flew in sideways at the participants, at times intensifying thanks to wind gusts of up to 35 mph. Multiple golfers had to chase their runaway umbrellas.

The turbulent weather pushed scores higher than last week’s regional, when New Trier shot a collective 299, Glenbrook North a 300 and Loyola a 301.

“I gotta say those were some of the worst conditions I’ve seen,” Drevline said. “The guys battled out there and they were playing against Mother Nature, as well. … It took an incredible 2-putt to beat us. It was not an easy day to play golf.

“They showed true grit. I’m really proud of them.”

The Ramblers tallied a 322 on the day for fifth overall, with much thanks to co-medalist Patrick Adler and his 74 — tied with GBN’s Jason Gordon and Maine South’s Myles Lahart.

Pryor was supported by Zyung and Michael Rudnik, who each shot 77, and Max Barr, who shot a 79. Gage Johnson (81) and Charlie Creamean (83) weren’t far behind.

Outside Adler, scoring for Loyola were John Rosinski (80), Joey Pieracci (81) and Peter Crowe (87). Ryan Banas and Cameron Boyd each shot 88.

GBN and New Trier were a handful of strokes ahead of the competition, as Lyons (316) and Maine South (316) tied for third and Loyola and York (322) tied for fifth.

It was the final tournament in an odd and unpredictable year that followed the lead of the COVID-19 pandemic.

“It’s sad,” Drevline said. “I’m a little disappointed we didn’t win, but the seniors missed out on a chance. An opportunity was taken away from them to show off their game at the state level.”

No state tournament is planned by the IHSA and there does not appear to be momentum to do so; however, Drevline and fellow state coaches are hoping to plan a final tournament of their own. They must first wait for the final sectional tournament — Friday, Oct. 16, in Rockford — to conclude.