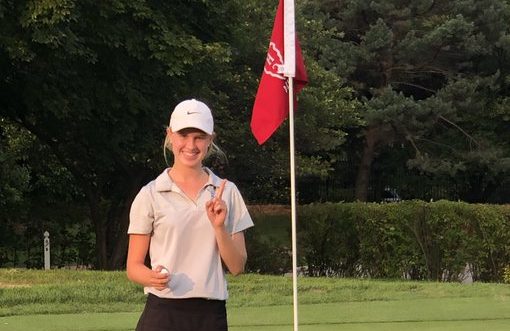 New Trier junior Peyten Sichol poses with her ball after a hole-in-one on Sept. 15 at Indian Hill Club. | Photo Submitted

Success can be as fickle as the wind, just ask New Trier junior golfer Peyton Sichol.

While thinking over her tee shot on the 9th hole at Indian Hill Club Sept. 15, she felt a breeze in her face and clubbed up to a 9 iron for the 105-yard hole.

It looked right off her club, the Winnetka resident said: “I was just thinking it looked pretty good.”

It was much more than that.

Sichol’s well-struck shot flew in-line with the pin and landed on the green about 10 yards from the hole. It took one large skip and a couple small ones, before a final short roll into the cup.

It was a hole-in-one, the first for Sichol, whose masterful shot also made her the individual champ of the dual match with Loyola Academy.

“I was really excited because it was the last hole of the tournament and everyone was watching it,” she said.

Sichol actually did not get to see her ball fall into the cup. A “little hill” near the front of the green blocked her view. But when she heard the cheering, she knew.

It was the first hole in one for New Trier girls golf this season and only the third Trevs coach Scott Fricke has witnessed from any team in his 16 years as a golf coach — one by Avery Connelly (2009 New Trier graduate) in a practice round and one from Buffalo Grove’s Katie Fontanetta (daughter of NTHS Athletic Director Augie Fontanetta) in 2015.

The hole-in-one golf ball is currently being mounted for Sichol by Indian Hill Club, and Sichol said it will be displayed somewhere in her bedroom.

Peyton, along with her sister Carter, is a consistent contributor for a talented, young Trevians squad that won its conference meet on Tuesday, Sept. 29.

While Peyton may have bragging rights over her sister, she doesn’t hold them in the household. Younger brother Tucker, 12, recorded a hole-in-one first when over the summer he buried a tee shot on the 13th hole at the Winnetka Golf Club.