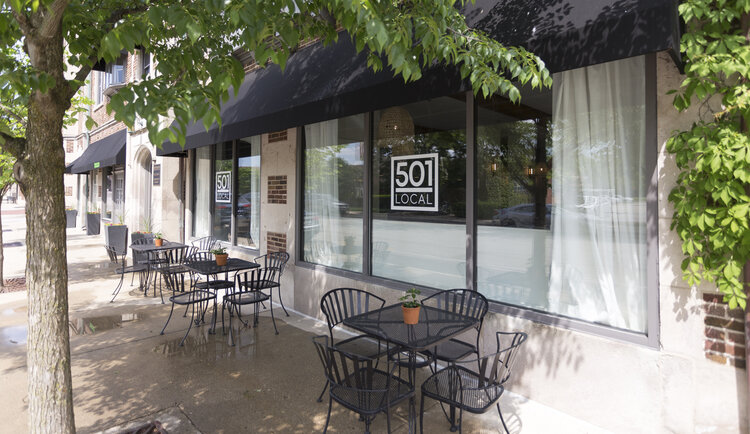 Opening a new restaurant during an ongoing global pandemic and financial crisis unquestionably has its challenges. But two months after doing just that, Mark Salmon couldn’t be more thankful for the opportunity.

Salmon is the owner of 501 Local, the newest addition to Winnetka’s dining scene, and he is thrilled with the support his team is receiving so far.

“The community has been 100 percent supportive so far,” he said. “Everyone, including the town itself, has just been so supportive. The (village) is trying to bend over backward to make it feasible for us to survive.”

Salmon said he couldn’t imagine a better welcome from the community, adding opening in Winnetka was a pleasure because it’s a village that cares about local businesses. The Chicago resident has a history in the Winnetka restaurant community, as he was a part of the management team behind Little Ricky’s, which closed in August, for nearly two decades.

The new neighborhood bistro — located in the former spot of Trifecta Grill at the corner of Chestnut and Elm streets — officially opened in early July. The ownership group behind 501 Local originally hoped to open in March but altered its opening plan after the state’s stay-at-home order was issued.

Salmon and his team provided a soft opening for the restaurant in late May as a way to showcase the space’s outdoor patio and the restaurant’s food and drink offerings.

After taking over the space, the management team behind 501 Local remodeled the interior and created what Salmon described as an all-encompassing menu.

Salmon said everything on the menu is homemade and fresh, adding he believes every diner will find something to enjoy on the restaurant’s “creative menu.” He described head chef Yoonseok Jang’s cuisine as “strikingly” good and said diners have been extremely impressed with 501 Local’s offerings thus far.

The local eatery also has an extensive cocktail menu that features a selection of wines, on-tap craft beers and signature speciality drinks.

One of the highlights of the restaurant’s drink menu is a cocktail called The Carryover, which earned its namesake by being the only menu option from Trifecta that transitioned over to 501 Local.

Salmon said the drink, which is a basil-lime Gimlet, has been a popular choice since opening. 501 Local also plans to debut a new fall drink menu “very soon,” he said.

Daily lunch service is also expected to debut soon from 11:30 a.m.-3 p.m., Salmon said. The kitchen will briefly close after the lunch hours to prepare for the night’s dinner service but the restaurant’s bar will remain open.

501 Local will also be getting individual greenhouses for guests during the winter season.