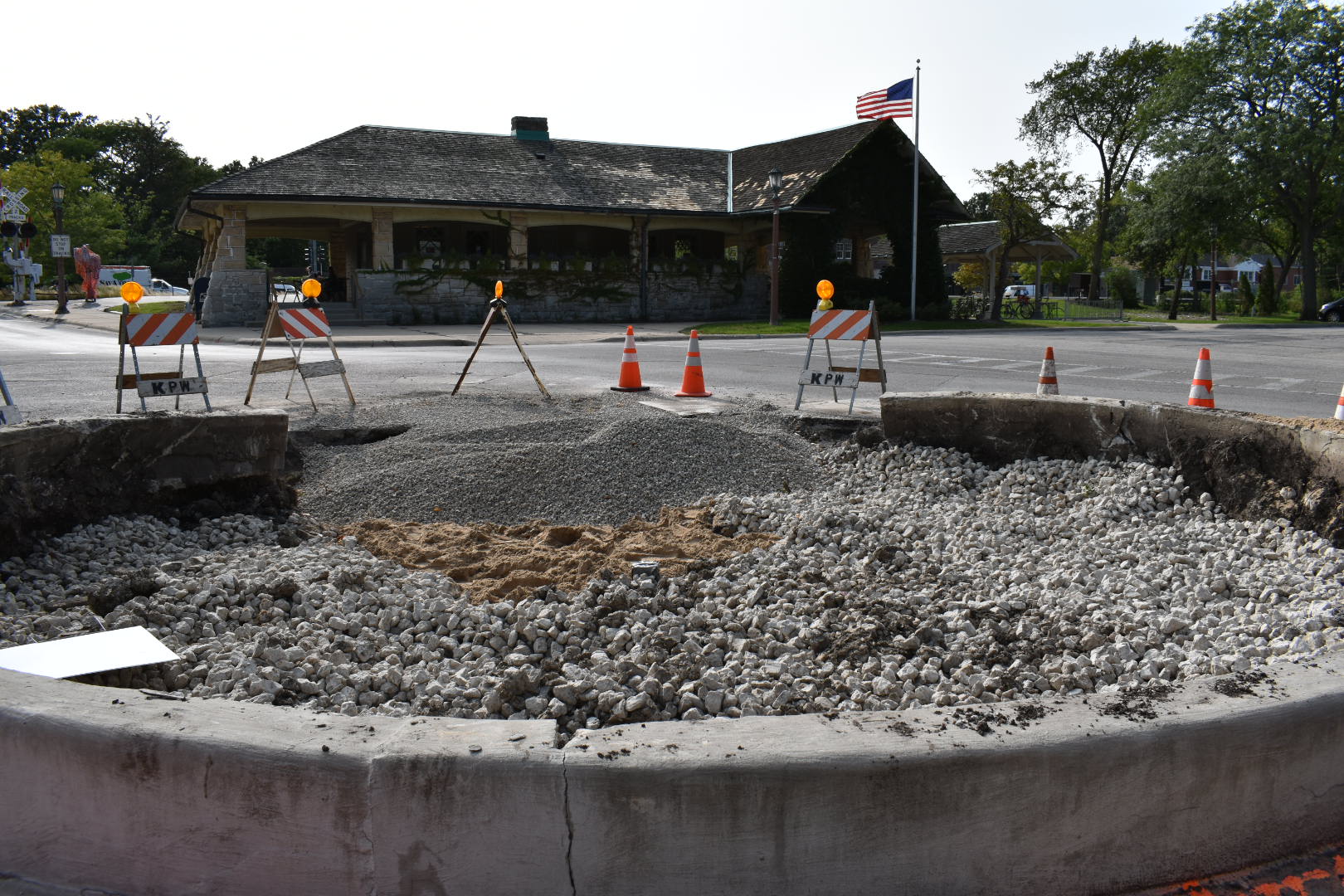 The village’s signature public fountain on Kenilworth Avenue is in the process of being replaced with a near exact duplicate of it. The replacement project is made possible by a $100,000 donation from an anonymous Kenilworth family. | Joe Coughlin/The Record North Shore

One of the hallmarks of Kenilworth is getting a much-needed facelift thanks to a sizable six-figure donation from a local family.

Construction is already underway on the village’s signature public fountain on Kenilworth Avenue, which is being replaced with a near exact replica.

Village Manager Patrick Brennan told The Record the village has been trying to find a way to replace the fountain for the past year because it has reached the point of “beyond repair.”

Kenilworth officials also hoped to replace the fountain in advance of the village’s 125th anniversary next year, but the village struggled to find ways to allocate the necessary funds needed for the project.

After getting word the village was looking at replacing the historic fountain, a Kenilworth family contacted the village and said it would like to help make it happen, as long as they could remain anonymous, said Brennan who added the donation completely changed the project’s outlook.

“The fountain replacement would not have happened without the donation,” he said. “We have some other capital needs in front of us and I don’t think the board would have approved.

“Without their generosity, it wouldn’t have happened. In Kenilworth, it follows a line of just very generous residents. The Village Hall building, the historical society building, was actually donated by a family, so I think it’s part of the nature of many of our residents to give back.”

Work on the replacement project began in early September, as the original fountain was dismantled and removed Sept. 10, Brennan said. The Village hopes the new fountain will be in place by the end of October or the start of November.

Brennan said the first step in the process was finding a firm that was experienced in fountain work. He added a firm’s prior experience was important because fountains sometimes have a tendency to leak and have problems.

Carved Stone Creations, of Kaukauna, Wis., is the firm executing the fountain replacement, for a cost of $99,643.50, according to Village documents.

The village favored the firm’s proposal because it provided an upgrade on the stone of the fountain for approximately the same cost as other proposals quoted. The new fountain will be granite, as opposed to the original fountain’s sandstone.

Extensive measurements of the original fountain were taken to ensure the new fountain is a near replica, Brennan said. The village also retained the ornamental fish from the top of the old foundation and that will be included on the new fountain.

“I think the only thing really is that when people see the new one it will look almost identical, except it won’t be patched,” Brennan said.

Much of the stone from the old fountain could not be salvaged because of the extensive patching it underwent throughout decades of repairs but the village was able to save the center top bowl, according to Brennan. The bowl is going to be donated to the historical society and will be on display there.

The family’s donation covers the cost of the fountain itself but does not cover the cost of the site demolition or the preparation work. Village officials estimate the project’s total cost will be approximately $133,375.

Brennan said the village has reached out to see if any other residents may be willing to donate to help cover the remaining costs of the great.

As of mid-September, the Village has received approximately $12,000 donated toward the preparation and foundation work budget. The village will step in to provide the remaining costs if it cannot obtain the donations, according to Brennan.

“We didn’t want to lose the opportunity to gain the generous donation, so we’ll find room in the budget to find the shortfall,” he said.

Overall, the village couldn’t be more thankful, he said, for the help it has received in making its fountain replacement goal a reality.

“The Village Board was super appreciative of that generosity and we’ve had people calling in and expressing gratitude that we are replacing it, because they knew that it needed some help,” Brennan said.

“It was pretty rewarding to be out there on site when we were taking the fountain down and people we’re stopping and telling us, ‘thank you so much for getting this done.’ We did have several people dropping their mouths open saying, “please tell me you’re going to replace it.”